I was born on Easter morning, April 10, 1955, in a small country house just outside the village of Vesterborg on the island Lolland, where my mother was casually employed. Her husband at that time was in jail every other moment and then she met my father, whom she later married after a divorse. But at the time I was more than half a year old and I was baptized the day after their wedding. They were married civilly at Nakskov City Hall and I was then baptized the following day at Halsted Church. There I was given the surname Hansen. If I had been baptized earlier, it would have been Olsen as the last name. Later, four more children came into the family, one of them, however, died quite early. And then there were a couple of half-siblings who were older than me. My father adopted them too (it became official on October 22, 1963)
My mom was at home and looked after the house, home and kids while my dad provided the income. So it wasn’t the big deal to do with it, but it went well and we always had food to eat and clothes on the body. Since my father was very old-fashioned and would only work with cows, the income was probably not so great, but a TV should he also be able to afford. And as cows gradually became more unprofitable and sold off, we had to move regularly to a new place where they still kept cows. Of course, this also meant that we had to change schools regularly, making it 7-8 different schools. Nonetheless, there were a couple of 8th grade teachers who thought I was misplaced and should then probably change to something better, but it did not turn out that way.

When I went into this 8th grade, my father had a work accident and died. I was 14 at the time and my mother got a boyfriend after some time. Maybe there was nothing wrong with that, but I couldn’t get along with him. He only thought about drinking beer all day long. That meant that I had to get out of the house and earn some money for myself. So there was neither time nor money for proper education. For me it was pure survival the best way. And without education, it is not the big money you can make. I have now mostly served very well anyway. But it has also cost blood, sweat and tears. Most of the time I worked 60-70 hours a week for a relatively small salary in various jobs. For the past many years I have worked as a driver. I’ve traveled all over Western Europe in a truck even it was was Christmas Eve or New Year’s Eve. But I have no one to go home to. I got out of the truck for the last time in 2011 and have since driven taxi, a little limo and flex traffic (mostly in minibus with most pensioners and the sick who were going to a doctor, hospital or various clinics). There has never been any really interesting job. I allways had a dream of becoming a pilot, but unfortunately it never happened. That kind of money I never had.

Some of the cars, I have driven throug the years.

However, in May 2018, I became ill and lost the right to drive for others and I have been staying home ever since. First on sickness benefit from the municipality and later on a transitional allowance that could be poorly lived. Here I got thankfully an invaluable help from a sister and a brother. Without them, I was probably dead by hunger or lack of medication. Now I have retired, which I should probably be able to manage, even though I did get behind a few things before this one came into place.
I live in the countryside a little outside a village on Lolland, the same island on which I was born. Here I have an old house that might need a loving hand, but it is big enough for me. I live after all alone being considered too ugly for anything else, and now I’m also too old for something else. A bit lonely and sad, but this is the fate that has been bestowed upon me.
I have always been interested in Danish history and this is probably one of the reasons why I started genealogy. Throughout this hobby I have met some people – maybe a little far out in the family that I otherwise never had heard of before. But it has been very interesting and I see it as an important thing to know where you come from. Now I also have more time for it (after all, I can’t walk and mow grass every day). Now it’s more one a matter of how long this old PC will bother with it. My current workstation is allmost 10 years old here at the time of writing, and a new one is not coming up right now. The interest in history also makes me want to visit the old danish colinies in the Caribbean. What use to be called the Danish West-Indies. Theese islands were danish in about 300 years untill they were sold to the United States in 1917 and are now called the United States Virgin Islands. But it probably will always remain wishful thinking. IÂ´s was a wery dark chapter in the danish history and as I recall, we did not hear about it in the scools history-classes. IÂ´m absolutely NOT a racist, and IÂ´m happy to know that no-one in my family had nothing to do with this. IÂ´m also happy to know that Denmark were one of the first to stop the slavery. But there still are traces of that dark time and I wood like to see them with my own eyes.

Some of my rolling working spaces: 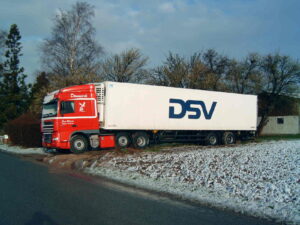 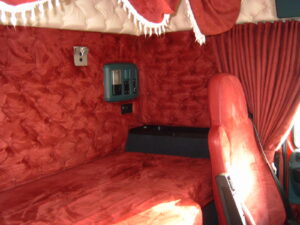 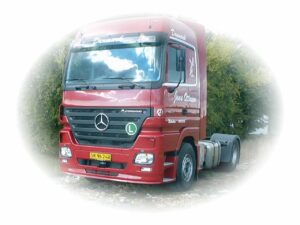 In theese trucks (and others) I lived on the roads in Denmark and in Europe.

For some years I travelled around i Denmark and Scandinavia for a danish compagny. And also a week on the Norhsea. I was send out to an oil-platform in the “Dan Bravo” oilfield. We could not live on the rig, but has to sleep on a old oiltanker, who was function as a hotel. From here we came out to the rig every day and back with a helicopter. We had to put on a speciel suite before we went into the helicopter as one of my collegs are showing here: 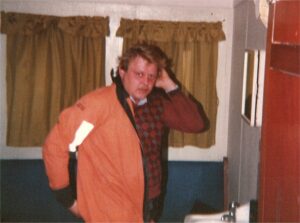 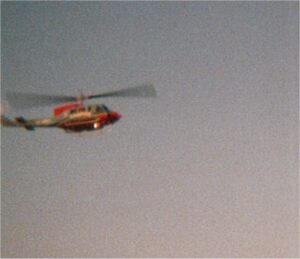 Some years later the Export-adventure started. First it was transport of hams hanging in the top of the trailer and then on to Italy or England. One of the biggest receivers was the tenor Pavarotti in the little town, Castelnuovo Rangone just outsite Modena. But of course also many others. 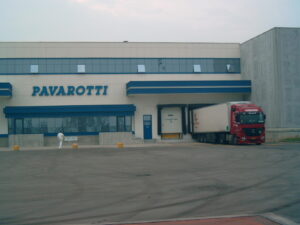 Here I unloaded hams by Pavarotti. He had this company and was a partowner in another company not far from here.

When that was done, it was time to get another load of something. What that could be, could be very different. Mayby not what should be transported in that kind of a trailer. If there were no fruit or vegetables, it could be some other stuff. Allmost anything at all. And not allways to Denmark. I could be to another country. Sometimes we loaded ice-cream. 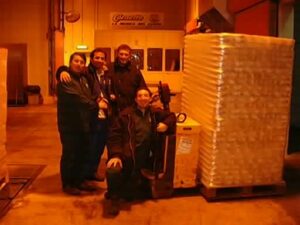 Her I´m loading Magnum ice-cream in Caivano by Naples 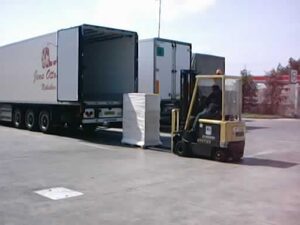 Even it was summer and very hot, the loading was out in the strong sun.

But in the spring 2011, it came to an end with the trucks. The last couple of years I loaded frozen goods in Vejle in the west-land and took it to stores all over east-denmark. But we drivers from outstanding firms had to drive more and more. But the did not have more time for it. So I stopped driving trucks. Then I started driving taxi, a little limosine og the last was Flextrafik. It´s a buscompagni who drives for the public regions and other public office. That must be the most expensive transport-compagny in the world, but they keep the money themself. Only few money goes out to the cars and drivers. That makes the job mayby the worst paid job in Denmark. It was mostly 12 hours shift, and the compagny decides how much you earns. I have – more than once – had a 12 hour shift on a puclic holyday get paid for mayby ½ hour. Some municipal office admit that it´s to expensive and som choose to send people a taxi in stead.

In may 2018 it was all over. The doctor forbid me to drive anymore. That means I can drive but not for other people. My boss did not want to help me. The law says he has to pay for a while, but he would not. In the beginning of my sicknes I did only survive on a very small income. But later I got a pension form the state. So now I just sitting all alone at home and I´m bored.